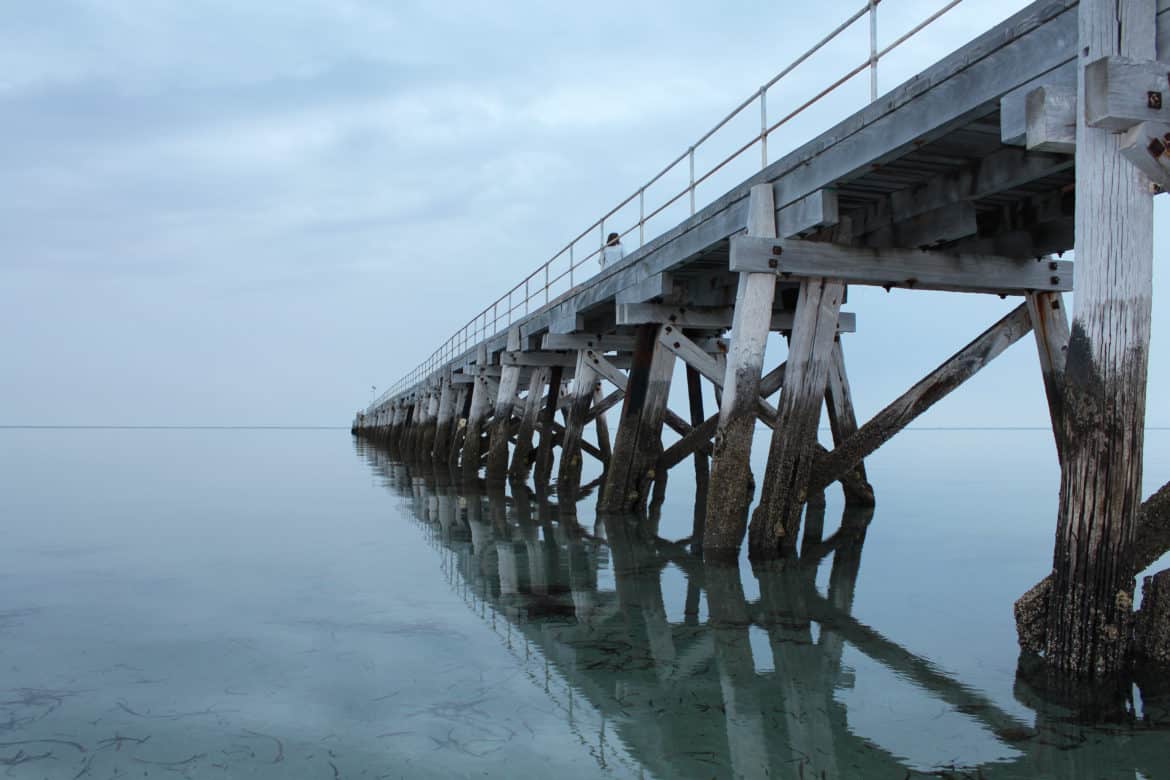 The end is nigh! Just kidding. In fact, it’s a three kilometre trip to the end of the jetty and back at Port Germein in South Australia but as Zora Regulic discovers, it’s one of the loveliest walks you’ll ever do.

How’s the serenity – my first thought when gazing over Germein Bay, the calmest expanse of water I have ever seen.

Port Germein is a lovely small town located in the foothills of the Flinders Ranges, close to the top of South Australia’s Spencer Gulf, overlooking Germein Bay. The town is on the tourist map thanks to its long wooden jetty and delicious blue swimmer crabs. The jetty is very, very long, 1532 metres to be precise, one of the longest in the southern hemisphere. 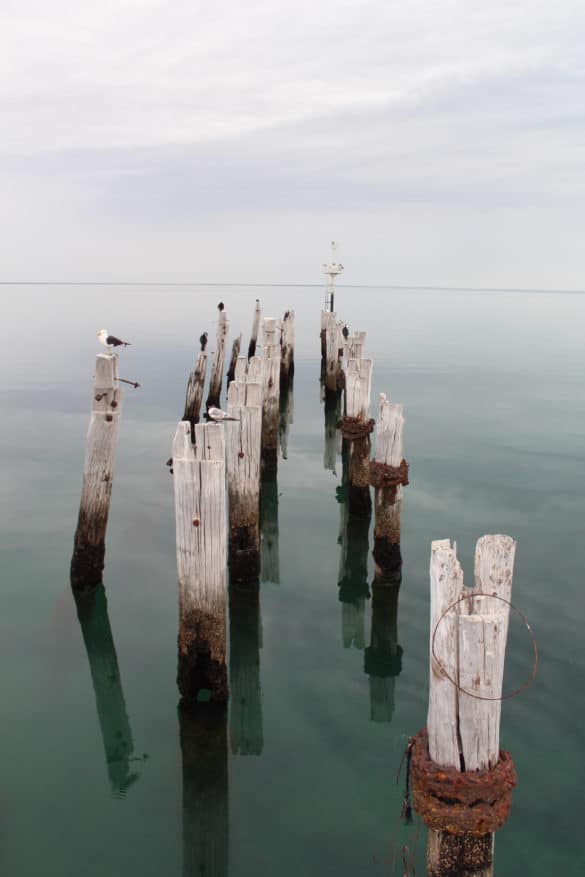 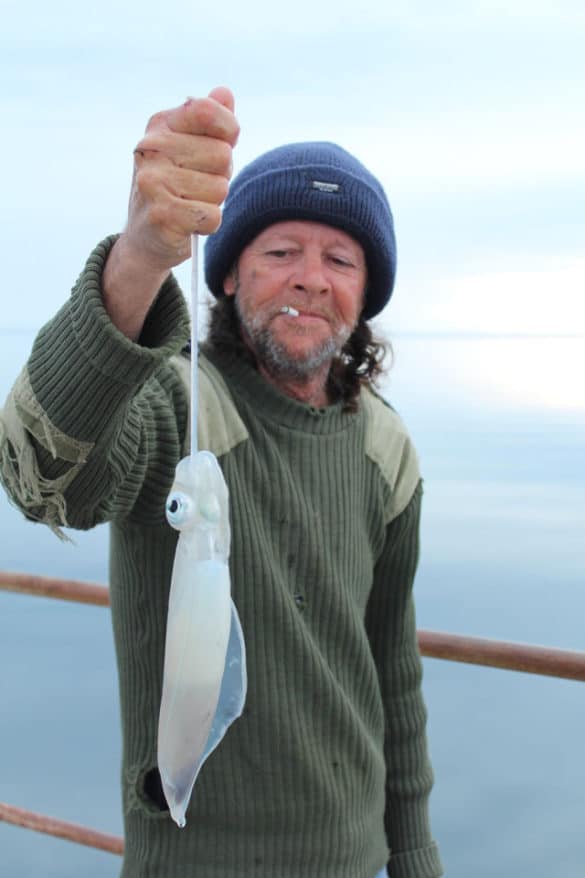 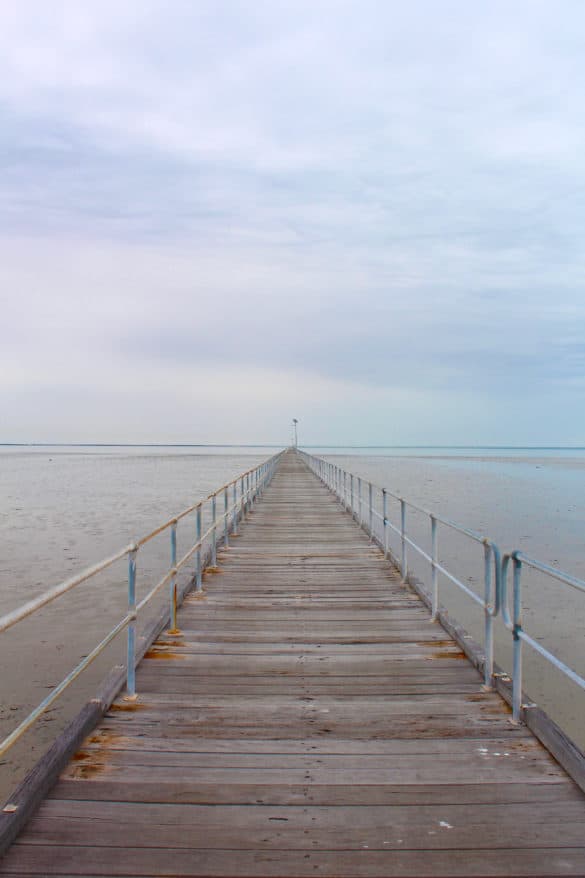 Why such a long jetty, you may ask. That question is answered by a very well signposted historical display at the beginning of the jetty.

At low tide at Germein Bay, you have to walk more than 650 metres on the sand before you get to the water.

Prior to the jetty’s construction in 1881, grain was transported along the sand flats at low tide by horse-drawn wagons, where it was then loaded onto platforms. At the next high tide, flat-bottomed barges, or lighters as they were known, would arrive and collect the bags of grain and take them to the clippers waiting further out in the deeper waters of the gulf, destined for ports all over the world.

Once the jetty was built, a narrow-gauge railway line was used to transport the grain, making the horse and cart redundant, and with no tidal time restraints, a much faster process. At its peak, Port Germein was the largest grain-loading port in the Australia. The port continued to operate until the 1940s.

Something fishy going on

The end of the jetty was like a mirage – “Surely I’m almost there,” I said to myself numerous times. Not one for power walking, it was a lovely meander to the end of the jetty. A couple of fishermen had their hand lines and crab baskets lowered, hopeful for a dinner of blue swimmers or squid. The crabs were scurrying through the reeds below. “Wow,” I exclaimed, “look at the size of them!” The fisherman had a good laugh at my expense, telling me they were babies. They were waiting for the big ‘blueys’. There were sharks and stingrays gliding lazily around and under the jetty, looking for their own dinner. Harmless, the fishermen tell me.

Leaning on the jetty railings, gazing out to the gulf, I was mesmerised and lost in thought. It was hard to imagine on this serene day that the weather in the gulf can be wild, so much so that it has ripped apart the jetty over the years. Evidence of storm damage can be seen at the end of the jetty, where the gulls and sea birds are happy to use the remains of the old pylons as a spot to preen their feathers without any interruption from pesky humans.

It’s easy to relax in this lovely town, watching the tide come in and out, beachcombing and of course eating delicious blue swimmer crabs. This is the place to slow down and enjoy the serenity. TTW

Around the world in 80 minutes