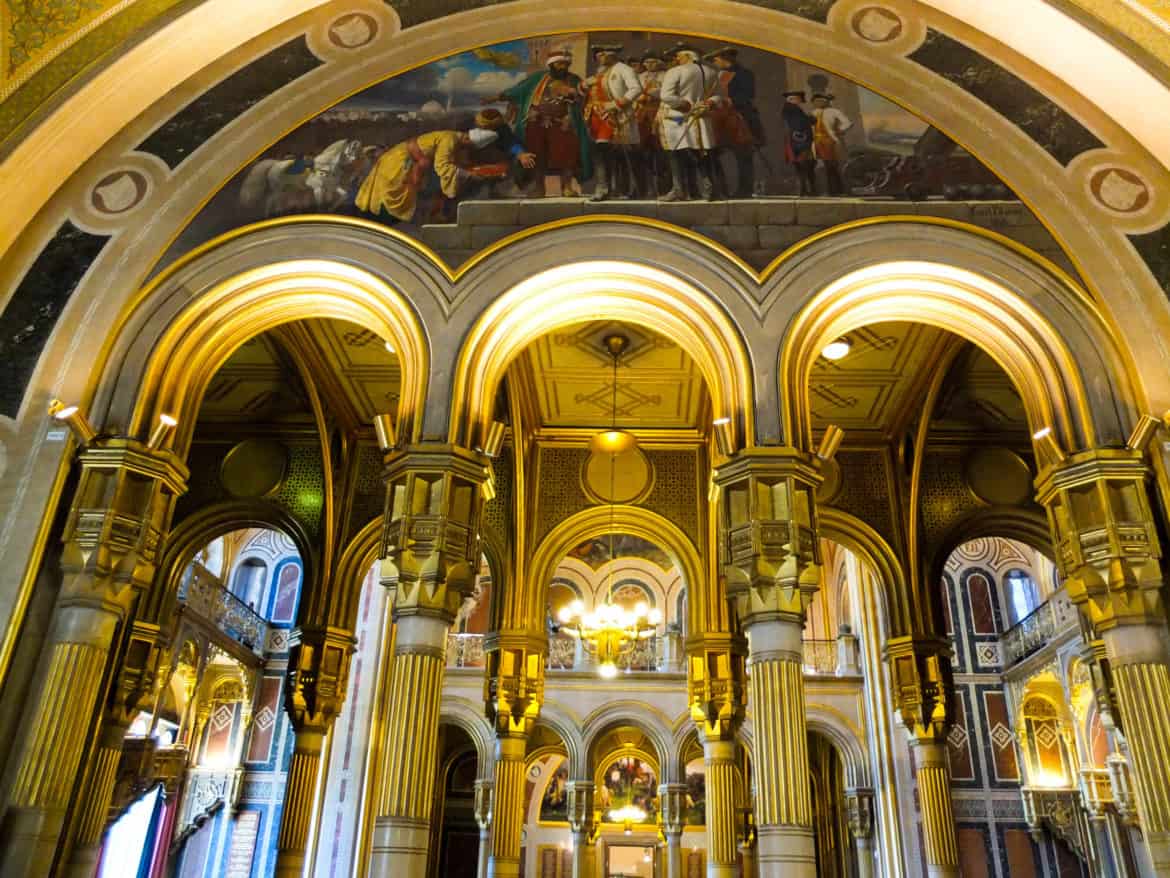 Atten-shunn! Fall in, everybody, behind Bernard O’Shea as he marches into a most unusual military zone and salutes its artistic bent and anti-war sentiments.

Vienna has many fine buildings – Schönbrunn Palace, the Belvedere, St Stephen’s Cathedral, to name a few – but the one that most aroused my curiosity on my first visit to the Austrian capital was the … take a deep breath now …  Heeresgeschichtliches Museum, which quite understandably is called the HGM for short.

If you are not sure whether you have an interest in heeresgeschichtliches, let me explain that it is the Museum of Military History, located on the southern fringe of central Vienna, close to the main railway station, Wien Hauptbahnhof. The Schweizergarten park is all that separates the military complex from the Belvedere Palace – which houses the world’s largest collection of paintings by Gustav Klimt – and together the three of them make for a wonderful day’s outing.

The museum is in standalone block in an attractive but odd complex known as the Arsenal. I say odd because while the buildings were built as fortresses in the mid-1850s, they look too ornate, too pretty to be in the cut and thrust of battle.  Still, they are solid and imposing – the skyscrapers of their day. The grand entrance to the Arsenal complex.

As interesting as the building exteriors are, it was a photograph of the museum’s stunning entrance, the Hall of the Commanders (pictured below) which caught my eye and made me think, ‘hey this looks interesting’. Not your usual run-of-the mill military museum! And so it proved to be. There are 56 statues in the Hall of Commanders.

To get to the museum, you have to walk through the archway of the Arsenal, cross its courtyard and then go out under another arch into the open air. Here you will come to the most unspectacular pond or water feature you will ever see – a very shallow geometric puddle with neither fish or aqua plants in it, whoever made it gets 0 out of 10 from me – but beyond it is the striking facade of the museum, topped by an ornate dome. The building was designed by Danish-Austrian architect Theophil Hansen, whose works include the parliament house and stock exchange in Vienna, as well as some prominent buildings in Athens. The dotted facade of the military museum.

The museum’s beautifully presented exhibits take up the two main floors of the building, and cover Austria’s military history from the 16th century onward. One of its most notable objects is the vehicle in which the heir to the Austro-Hungarian throne, Archduke Franz Ferdinand, was assassinated while he was visiting Sarajevo – an event that ultimately triggered the first world war.

Wings and wheels on display.

If you love male mannequins in uniforms, puffing out their chests and showing off their medals and epaulettes, knights in shining armour, cannons, helmets, rifles, swords and spears, this is the place for you! This is a hard hat area!

Take a stroll out to the back garden, where you will find an impressive array of tanks. In the back garden you can get your fill of tanks.

Personally, though, I think better use could be made of the garden area – I would have liked one of these beasts to have been converted into a coffee cart, serving up military strength coffee and landmine-size doughnuts and apple strudels, but that’s just me. (There is a cafe in the museum, and a more formal restaurant in the Arsenal.)

Most importantly, be sure to wander all the way up the stairs or take the lift to the grand rooms below the dome, which must have been conceived as function halls and ballrooms. The decoration up here is exquisite. On its website, the HGM outlines the somewhat quirky evolution of the museum and attributes much of the interior design to Carl Blass and Carl Rahl. How would you like this as your upstairs chamber?

The art on the walls and ceilings depicts famous battles or incidents from Austrian military history. Of course, military museums have their sombre side. They document the history of human conflict, brought to the most violent extreme, and are a stark reminder of the greatest follies of mankind. One of the museum’s paintings, the sinister and creepy To The Unknown Soldier by Albin Egger-Lienz, illustrates this superbly. To The Unknown Soldier, by Albin Egger-Lienz.

The HGM captures this feeling beautifully with its patented slogan “wars belong in museums”. If only they would stay there.  TTW

Bernard O’Shea travelled at his own expense. Photos © Bernard O’Shea. More at Vienna Info and at the HGM website.