A nervous guy in Brasilia 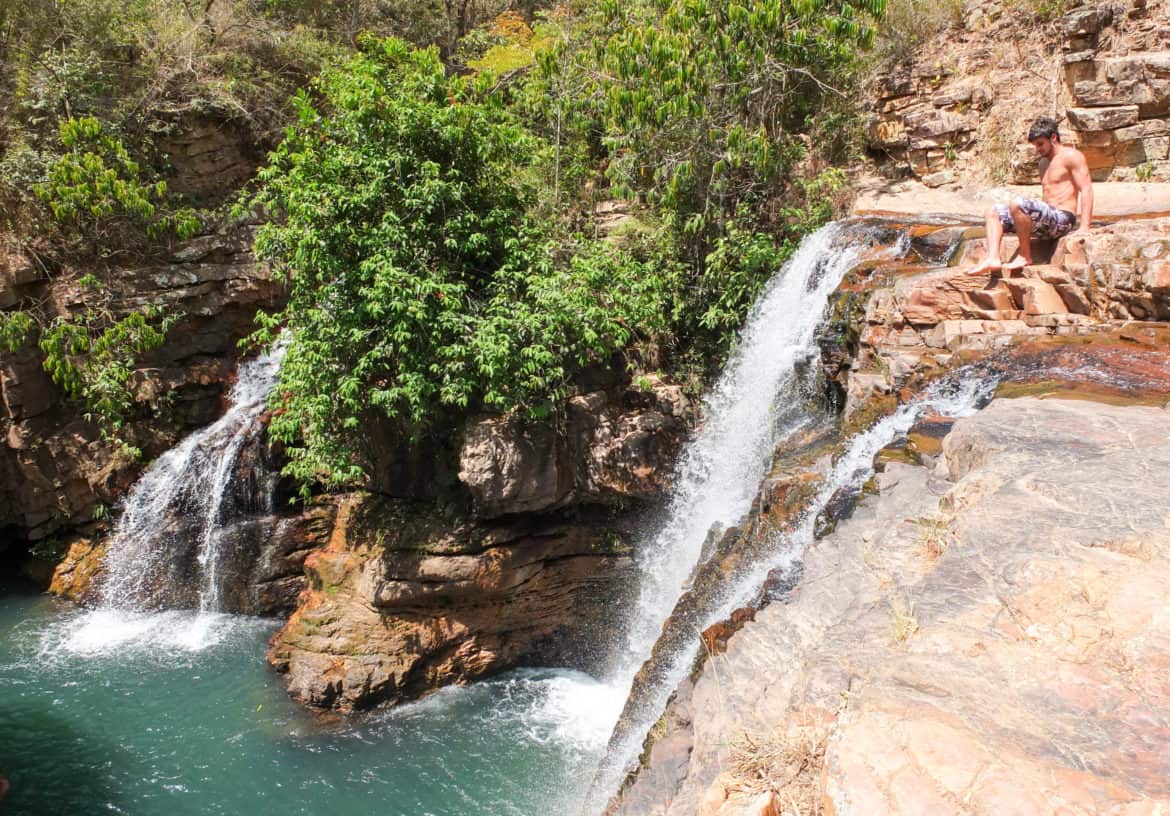 Many people have a fear of heights. Bernard O’Shea witnesses an epic mental struggle.

At first things went well: he had no problems with… let’s call it the medium-high jump at one of the waterfalls and rockpools in the vicinity of Poço Azul. That’s him below, showing no sign of the torment that was soon to come. Ready for the medium-high jump.

But then he and his friends moved on to the Poço Azul (Blue Well) where the biggest waterfall is nicknamed – shock, horror, gasp – the Cachoeira do Suicídio! (You know the Poço Azul? No? Please, let me introduce you to it here, it’s cool.) The Cachoeira do Suicidio.

It seems he and his friends were now in for the high jump. The first leap of faith.

Friend number one shows how it is done. He opts for a kind of squatting “brace” position. Amigo number two keeps it tight and narrow, with his arms tight by his sides. No protruding backside. The judges gave him bonus points for that. Friend number three gives it a go. He protrudes everything – his arms, knees, posterior. It could be a belly-flop! Shall I or shan’t I? It seems our action hero has a lot to consider. Time passes. Is he meditating? Mentally rehearsing his moves? Or has he been hypnotised by the the beauty of Mother Nature and the sparkling droplets of water cascading at his feet? Or is he, to put it crudely, shitting his pants? He is! I need a push!

He turns to the cameraman – that’s me, by the way – his eyes pleading for kind words of encouragement and inspiration. “Oh for God’s sake,” I moan, “stop dithering! I can’t stand here all day in the hot Brazilian sun with my finger locking in the focus button on my camera – my finger’s getting tired. I wanna pick my nose. And my tummy’s rumbling, I’m getting hungry… Get on with it!” My words have a magic effect. He rises to his feet, takes a deep breath, runs up to the ledge and over he goes! He is airborne at last! He’s conquered his fears. Give him a hearty round of applause, show him the love by clicking on the love heart below.  TTW

Bernard O’Shea travelled at his own expense. Photos © Bernard O’Shea.
P.S. If you need a motivational speaker you know where to send the cheque. Be decisive. Send it now. 🙂

Getting jumpy at the Blue Well

Lisbon’s in the limelight