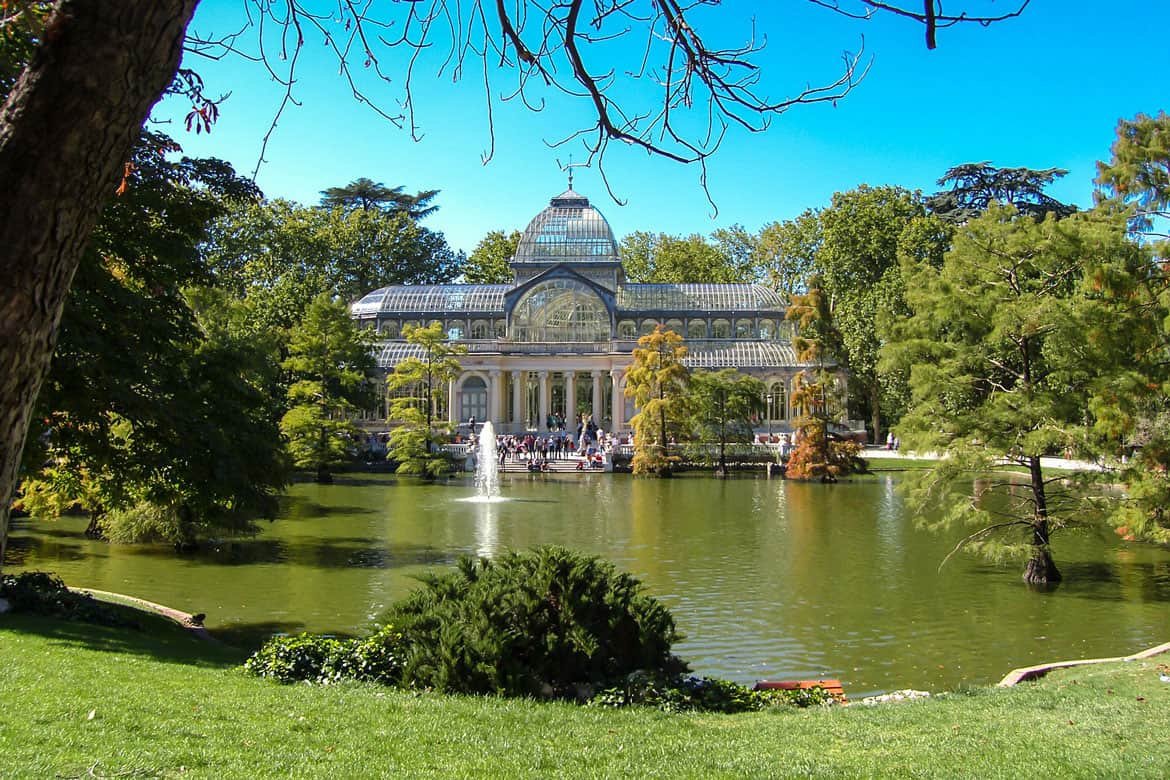 You have one day in Madrid to explore the city’s latest World Heritage sites. What could possibly go wrong?

Reader, be warned. I’ve read stories in travel publications about how to spend 36 hours here or 48 hours there, and I’ve always been suspicious of them. Either the writers are top ultramarathon runners or liars. They sound so accomplished, gliding effortlessly all day from A to B to C to D, checking out museums, eateries, palaces, botanical gardens, zoos, bridge climbs and ferry rides, then off they go to the trendiest nightclubs. Don’t their armpits get smelly? How do they sashay past the door Nazis? Do they carry their stilettos, silk dresses, tuxedos and blue suede shoes around in ginormous backpacks all day and do a quick clothing change in an alleyway or dunny somewhere? Don’t they ever get lost? Don’t they ever get jetlag or diarrhoea?

I suspect that most travel writers who conjure up a story on how to spend 24 hours in, say, Madrid, were actually there for a leisurely week; then back in the comfort of their home offices they sit down and cobble together an itinerary in a sequence that they’ve never done themselves, making their round-the-clock story a kind of best of Madrid, for those prepared to run around like headless chickens.

But trust me, reader, I’m not like them. I’m not accomplished, I cannot run around like a headless chicken all day. The best I can manage is to slouch around like a headless sloth. I stand for truth in journalism! So this is what really happens when you try to do 24 hours in Madrid. (I actually have 27 hours but three have to be reserved for getting to the airport for a connecting flight to Porto next morning. I also have two teenage nephews with me so we’re not going to go to night clubs: they’re too young, I’m too old. Plus they get smelly feet and armpits pretty quickly, they’d never get past the door Nazis. Don’t you dare comment on mine.)

It’s impossible to do Madrid justice in 24 hours, of course, so my goal is to focus on Paseo del Prado for urban excitement, and Buen Retiro park for calming greenery. It’s a clever choice, one that makes me feel quite accomplished – in July 2021 the UNESCO World Heritage committee inscribed them as new World Heritage sites. Where Bernardo goes, the World Heritage committee soon follows. You should hire me as your super-duper 24-hour tour guide.

7.15am Arrive at Madrid Terminal 1. It feels reassuringly retro, kind of late 1970s. Get past Customs and Immigration, collect suitcases. Hang around for what looks like the only shop that might have local mobile phone SIM cards to open. Buy a SIM card with a local network that the moustachioed sales dude assures me will work well in Portugal too. Get him to insert SIM card in my phone because I’m hopeless at it. We all write down the Spanish phone number and password in triplicate for the instances when I’m bound to forget.

8.25am Locate taxi rank and drive to nearby airport hotel, while trying not to look too unimpressed with the industrial outskirts. Check in, inspect the rooms and common property. It’s a hot April morning. Put on swimming costumes and head to the outdoors swimming pool – the one that looked so gorgeous on the hotel website and was the reason why we chose this airport hotel in the first place – only to discover the gates are locked. The pool will only be opened in summer. Bummer. Discover also that the communal lounge/bar/restaurant where we envisaged having tapas, toasted sandwiches and barista coffees is closed too. If we’re hungry or thirsty, the snack and coffee machines in the hall will have to do.

10.30am Catch an Uber to San Fernando railway station. Spend 10 minutes studying the network maps and the bewildering purchasing options and button instructions on the ticket machines. Why does Spanish look so difficult when it comes to spending money? Decide it would be safer to buy from a person at a booth. Wander around looking for a person at a booth. Return to ticket machine and study the bewildering buttons again. Put on my best “damsel in distress” look in the hope that a kind passer-by will come to the rescue.

10.37am. People come and go, a train comes and goes. Realise that I’m now at the age that no one – no matter how perverted or kinky they are or what peculiar fetishes they have – wants to be my damsel rescuer. Well, stuff them! Just buy some tickets. Hit a button, swipe the card. Oh shit shit shit! We have 24 hours in Madrid and we have enough rail tickets for 24 days. Never mind, just get moving! We’re down to 21 hours already. 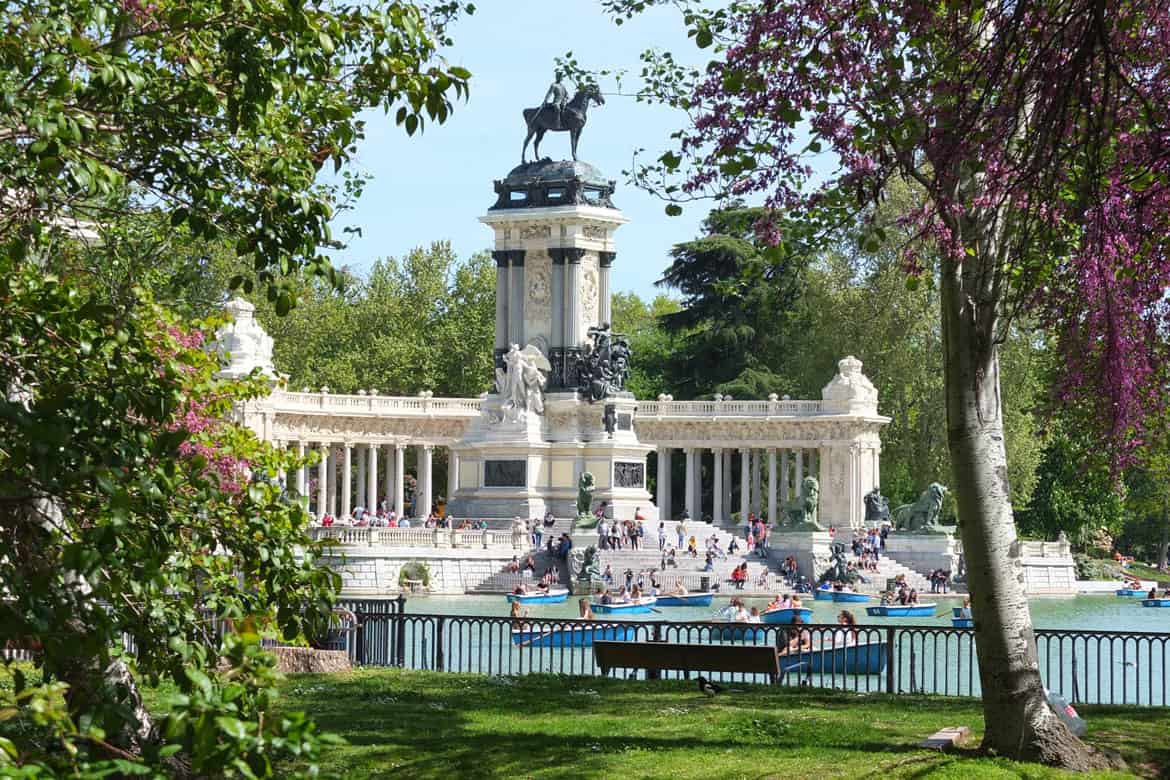 Alfonso XII and his unnamed horse have the best view of the park. Photo ©Bernard O’Shea

1pm Arrive at Principe de Vergara station having changed from the orange line to the green line at Pueblo Nuevo and to the red line at Ventas. Wow, this is more like it! Madrid is looking gorgeous. A grand European city with a real buzz and lots of greenery too. And lots of traffic. The Parque del Buen Retiro is nearby but we’re hungry. We find an inexpensive looking restaurant in a little alleyway that’s shielded from the noise of the traffic on the busy main roads. The service is slow and the food’s average (none of us can remember what we ate) but it’s nice to unwind and sample the vibe.

2pm. Time to explore the Parque del Buen Retiro. It’s huge – about 125 hectares – and dwarfs the neighbouring Real Jardín Botánico, which is only eight hectares. There are monuments, fountains and statues scattered all over the park, which was once the grounds of a royal residence. Our starting point is the massive Monument to Alfonso XII overlooking an artificial lake, where boating is popular. To the south are Palacio de Velázquez and the lovely Palacio de Cristal glasshouse, both used by the nearby Centro de Arte Reina Sofia for temporary exhibitions. 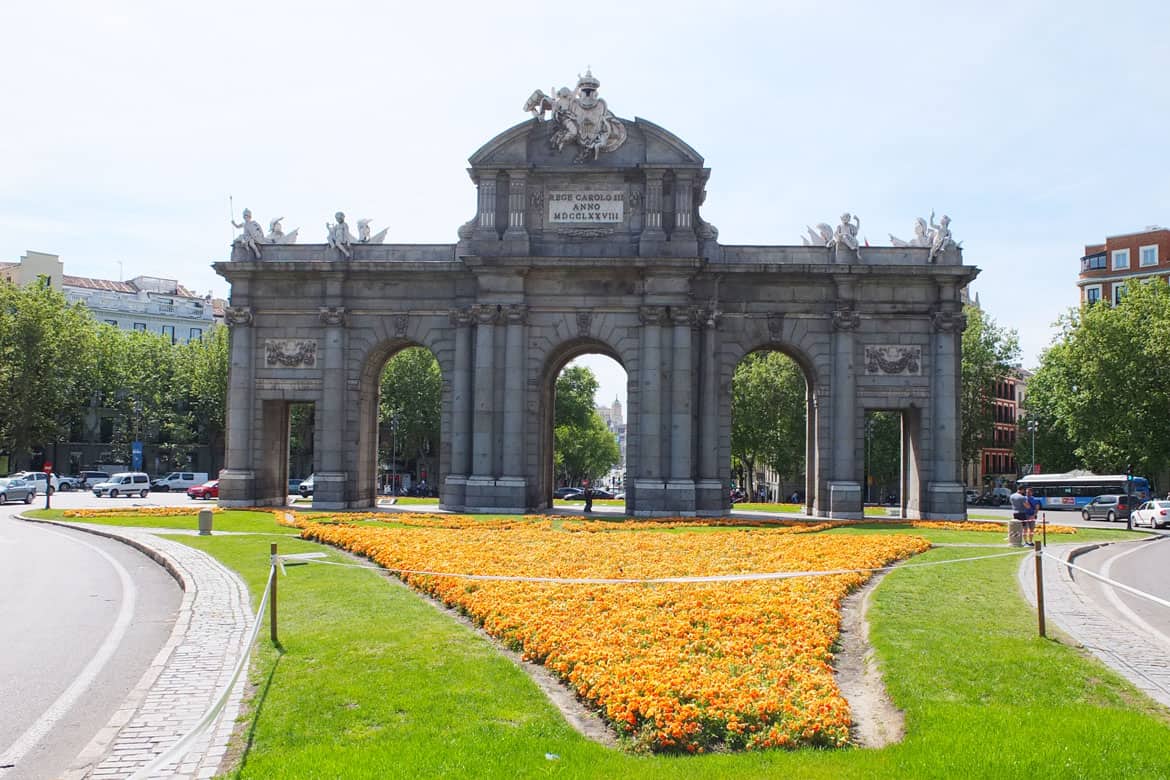 On the road again

3.15pm. We exit the park at the north-west corner so that I can take a photo of the roundabout that sports the iconic Puerta de Alcalá, which was once the main entrance to the city.

3.20pm. The cars keep getting in the way of my picture. Someone stand in the road and block the traffic!

3.25pm. I dash across the road, risking broken limbs or even death, to the roundabout so that finally I manage to get a perfect shot of the Neo-classical gate without a car in the foreground. Well, it would have been a perfect shot if I were an accomplished photographer, but my camera’s on a funny focus setting and I don’t know how to correct it without studying the 237-page manual. Let’s call it a sufficient shot (the one above). I risk death again returning to the roadside. We can now head to the nearby Paseo del Prado, one of Europe’s grandest boulevards and, as UNESCO calls it, “a landscape of arts and sciences”.

3.30pm. I see on my mobile phone map that we’re heading in the wrong direction, so we have to go back to the Puerta de Alcalá roundabout and go another way.

3.35pm. I don’t believe it! We’re still going the wrong way, just that it’s a different wrong way. Why do the Madrid town planners have to make their roundabouts so complicated! 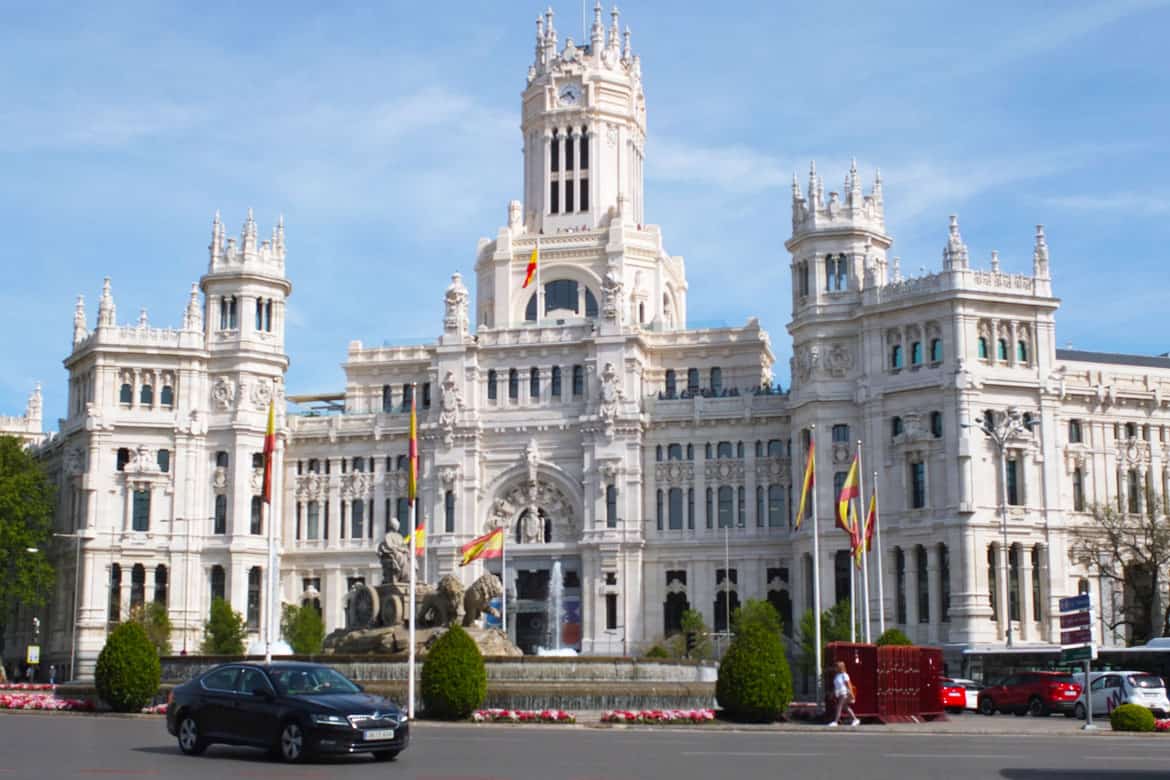 The fountains of the gods and goddesses

4pm. Third time lucky, we reach the famous Paseo del Prado, to be greeted by the spectacular Plaza de Cibeles. The fountain in the centre of the plaza, of the goddess Cybele riding a chariot pulled by two lions, is a marvel. Behind it is one of Madrid’s most beautiful buildings, the Palacio de Comunicaciones. Being an unaccomplished journalist, totally unaware that you can go up to the summit of the building and take in some of the best views of Madrid, we wander on to the next roundabout to admire the Fountain of Neptune, passing the Museo Thyssen-Bornemisza on the way. (In the photo above you can just make out people’s heads protruding from the balcony above the Palacio’s central flagpole.)

4.10pm. We come to one of the most famous museums in the world, the Museu del Prado. We’ve been walking for hours, it’s hot, we’re a bit sunburned, our armpits are smelly, but should we go inside, even if it’s just for a quick look around? “What do you think?” I ask my nephews. “Do you want to go in or should we start heading back to the hotel?” The hotel, they say. That’s young nephews for you: they’re not arty-farty, they’re just farty.

7.30pm. Back at the hotel, we’ve showered and changed into our pyjamas, the take-away food is spread out on the table. We have a good feed then relax in our bedrooms, getting our first glimpses of Spanish TV. By 10pm it’s lights out, and one of us is snoring heavily (me), leaving the energetic, beautiful people and accomplished journalists of the world to drink to their heart’s content and dance the night away in the trendy nightclubs and bars.

8.30am. We arrive in good time at Terminal 2, which has a much more modern feel than terminal numero uno, and enjoy barista coffees and delicious pastries. Life is good! TTW

Featured image at top by Carabo Spain/Pixabay. Bernard O’Shea flew Sydney to Madrid courtesy of On Foot Holidays. Accommodation and local travel in Madrid was at his own expense. For more information on Madrid, visit TURESPAÑA.

The polo field in Ghana where colonialism was given the boot