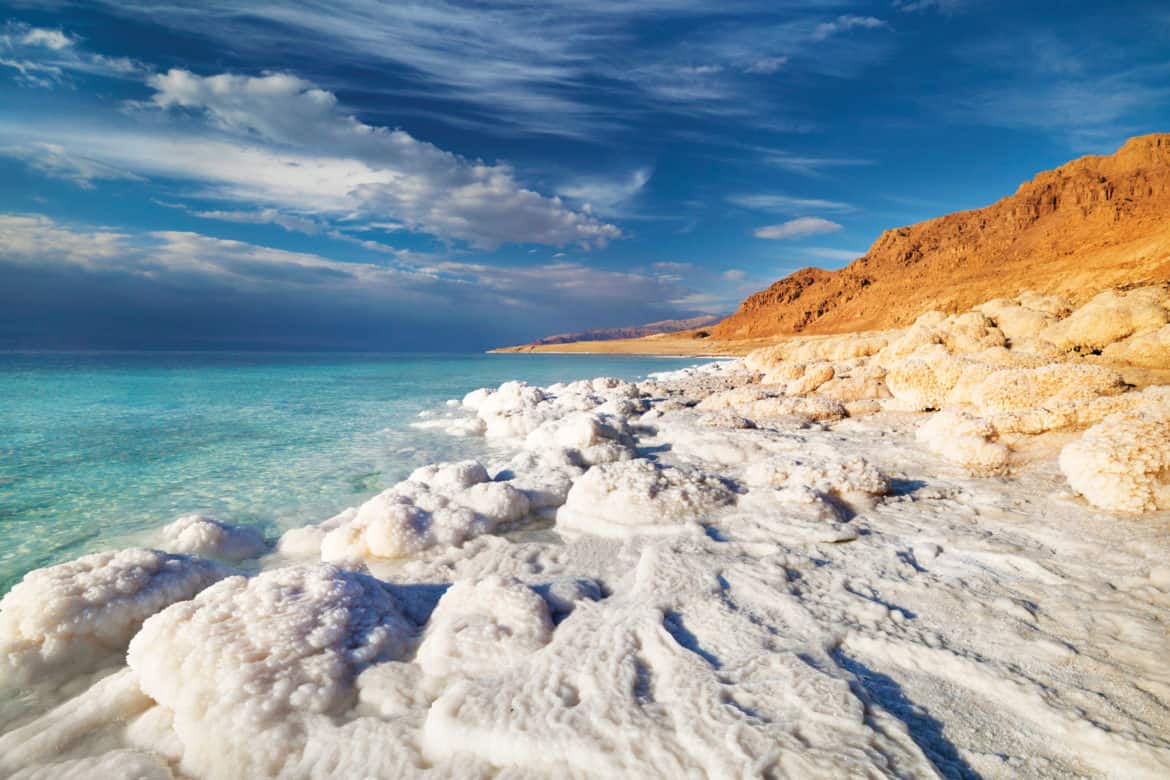 Swimming in the Dead Sea can either be fun or a painful experience. But no matter how heavy you are, it will float your bloat.

For a brief but thrilling moment, I discovered what it was like to be an Olympic swimmer. My sporting triumph occurred on the Dead Sea, which is renowned for its density – it’s almost 10 times saltier than the oceans and its water is like a thick syrup. It’s the kindest, most flattering weighing scale on Earth – as soon as you tread water on it, you lighten up.

I weigh about 96 kilograms. If I do breaststroke in a swimming pool, only my neck and head protrude above the surface. My head must weigh about 6 kilograms, as I am quite brainy, so that means in the pool my arms have to pull 90 kilograms along. It’s tough going! But when I assumed the breaststroke position in the Dead Sea, most of my body rose to the surface. I felt as light as a feather and all my arms had to tug through the water, really, was the extremity of my belly and chest, my kneecaps and toes (let’s not discuss any other dangling, protruding bits). It was a breeze! With every stroke I surged forward. All of a sudden I was Fleety Peaty (world 100m breaststroke record holder Adam Peaty). I was The Thorpedo (Ian Thorpe). I was The Flying Fish (Michael Phelps)! If only the cameras had been there to record it.

You’ll probably record your personal best times too but swimming in the Dead Sea is not a case of “on your marks, get set, go!” and diving in head-first. It’s wiser to enter gingerly, and with trepidation, because if you have any cuts or open wounds on your body, or even some recently shaved bits, they can sting like crazy. And if you get water in your eyes, OMG, the agony! But for the most part, it is a fun and unusual experience – people particularly like taking photos of themselves nonchalantly reading newspapers and magazines in their watery chaises lounges – and the mineral content of the water and mud is good for your skin in small doses (about 15-20 minutes at a time, followed by a good rinse under the shower).

The Dead Sea is actually a salt lake bordered by Jordan on the eastern side, and Israel and the West Bank on the other, and its name derives from the fact that no fish or plant can survive in its extreme salinity. While it’s great to be able to boast that you have “been there, done that”, that you have had the privilege of seeing one of the world’s most unusual places – it’s the lowest point on Earth at about 430 metres below sea level – in truth, most of your time at the Dead Sea will be spent relaxing by the pools at the exotic resorts along the shore. It’s a hard life! I was on the Jordanian side. This is plush magic carpet territory!

As you can tell from the photographs, it’s a very calm sea – the surface is mostly still and it shimmers in the light and haze. You rarely see a boat on it. It’s a place where you come to relax, to reconnect with nature and find peace within yourself, and also enjoy the pampering that the resorts provide. Most probably your stay will be a stop along the way on a tour of Jordan’s great wonders, such as Petra and the Biblical lands and other sights. Like much of Jordan, the environment may seem hot, dry and dusty, but it is rich in its own way, and surprisingly green and fertile in parts, particularly in the valley of the River Jordan, which feeds the sea/lake.

If you are visiting from other regions of the world, there is the thrill of coming across exciting new foods and immersing yourself in a new culture and in the vibrant colours of the local decor, while the genuine warmth and hospitality of the locals will win you over. TTW

More of Jordan on Time To Wander:

All aboard the Cutty Sark