Home DestinationsEuropeCzech Republic The changing of the guard at Prague Castle 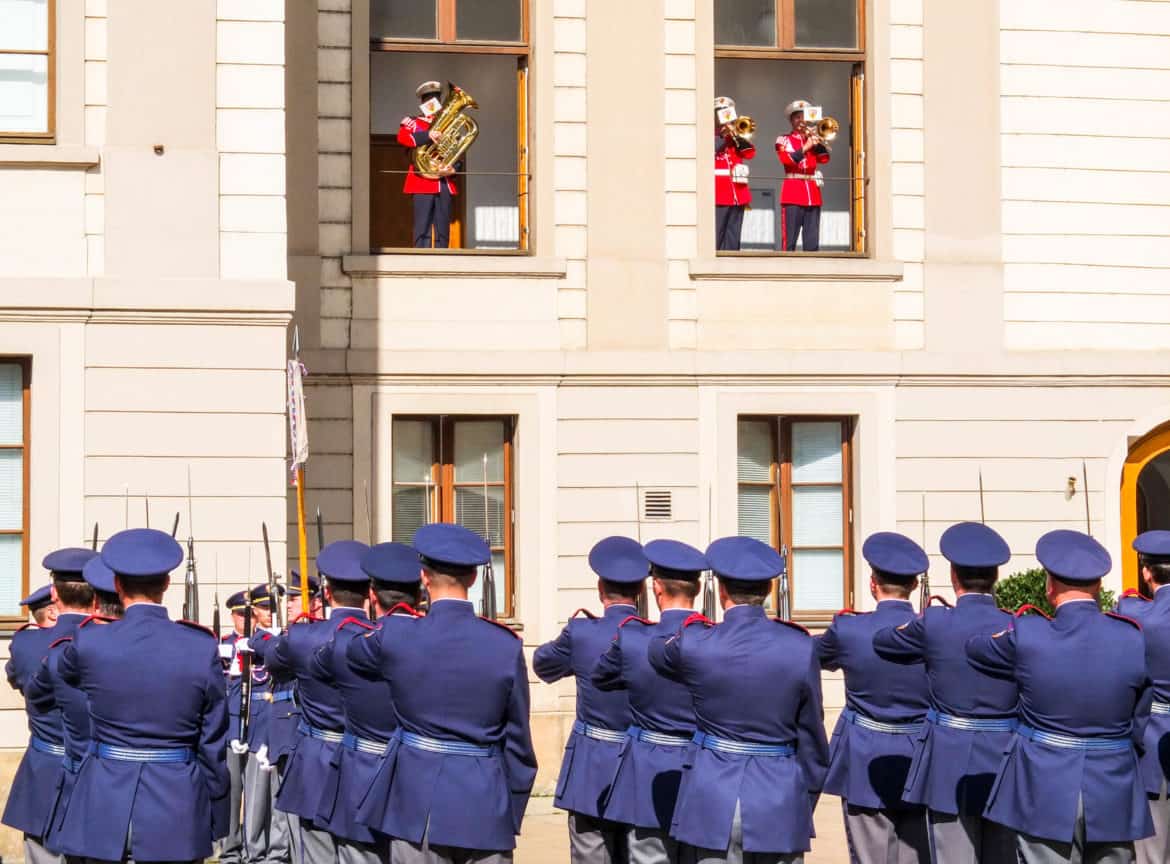 Prague Castle is one of the Czech capital’s main attractions, and your visit can come with fanfare – trumpeteers and men in uniforms on the march. Bernard O’Shea inspects the troops.

Frustratingly, there is little information about it to be found about it on the internet – the TripAdvisor discussion on the topic, for example, is vague, unhelpful and puerile in parts, and the topic was closed in 2013 – and the tourist pamphlets that you pick up in Prague say little about it. So, here’s Time to Wander coming to the rescue with the details, and our verdict and recommendation is at the end of the article.

Note: there are sentry posts at various points around the castle and the guards rotate every hour. We’re focusing solely on the noon ceremony which involves one large team of guards handing over to another, to the sound of music.

The castle entrance with St Vitus Cathedral behind it.

Prague Castle is massive – it’s not a singular castle building in the traditional sense but more of a walled village on a hill, linked by a series of courtyards, one of which contains the towering St Vitus Cathedral. The ceremony takes place in the first courtyard, where the main entry gates are – in the photograph above you can see people heading towards it and filing through it, past the pole with the Czech flag on it, to the second courtyard, which is where you buy your tickets to see the major sights. The changing of the guard is free.

For more on the castle, see Your grand tour of Prague Castle starts here There are two sentry boxes outside the main gates, and more inside (the Czech President has an office in the castle complex). The guards look suitably stern, but maybe if you tell them a good Czech joke they might slap their sides with laughter. It depends on the quality of your jokes. Mine are pathetic and my policy on my travels is not to mess with the military.

The changing of the guard ceremony begins inside the first courtyard – more than a dozen soldiers with rifles and one standard bearer march out from the door in the northern wing of the building. Note how the guy in the front row third from the back does not seem to be able to bend his knees as well as the others! All present and correct.

They position themselves against a side wall and stand to attention; at this point they are facing the area of the courtyard that has been cordoned off for spectators. Level one is the music section..

Members of the military band appear at the windows above and give everyone a tune. If you want to hear the music properly, it is better to be inside the courtyard rather than peering in through the fence and gates.

The replacements are on their way.

Meanwhile, about 30-odd relief troops arrive from their barracks just beyond the castle gates. You can see from the splendour of the buildings in the background that this area (known as Hradcany, or the castle district) has a rich heritage. The Archbishop’s Palace and Sternberg Palace – which houses the National Gallery’s fine collection of European art – are among them. You should factor in some time to explore this area before or after you visit the castle. The new contingent line up in the middle of the courtyard, do about-turns to face their colleagues on the opposite wall, and the standard is handed over. Breaking ranks to peel off.

Some of them march off in trios and go for a walk. The entrance to the second courtyard.

In the photo above, you can see the spectator viewing area, and the arch leading to the second courtyard. The soldiers are going to take up positions at sentry posts. Three of them – one with a yellow belt and two blues – head outside the gates, where the two blues on duty in the pillar boxes will be replaced. The yellow belt returns with two blue belts who have been relieved. The one on the left you may recognise as the stern I photographed earlier who probably wouldn’t laugh at my jokes if I dared to tell them. The dash for the gates. … while the newcomers march inside. And the band members down tools!

So, is it worth loitering at the gates to Prague Castle to witness the midday changing of the guard? If you are there at the height of summer and competing with thousands of other tourists, you may want to skip the ceremony because there is so much to see and large crowds inevitably slow things down.  Still, it is worth fitting in, if you can.

The various tourist circuits of the castle and their prices are listed here. The main sights open at 9am and close at 4pm in winter or 5pm in summer. To get the most out of your visit, therefore:

After all this, treat yourself to a decent sit-down meal!  TTW

The Sedlec Ossuary near Kutna Hora makes a fascinating outing from Prague.