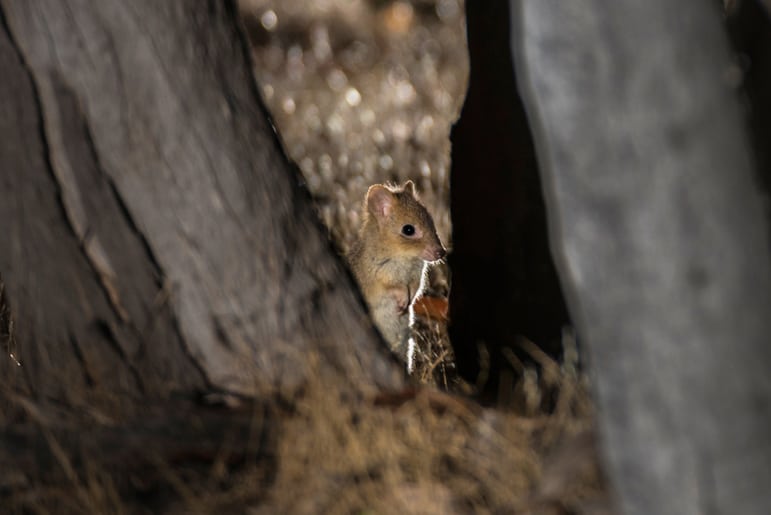 The little diggers who love truffles and potatoes are back in business on the Australian mainland after more than 120 years.

There is an underground movement in progress at the Mulligans Flat Woodland Sanctuary and its thriving membership has grown from 16 ten years ago to around 150 today. We don’t know their exact current numbers as the participants operate largely solo and under cover of darkness in search of their favourite food – truffles.

Eastern Bettongs were once a common sight on the east coast of Australia but their penchant for digging up freshly planted potatoes made them enemy number one with early settlers and the destructive effects of foxes and feral cats finished them off.

The Mulligans Flat reserve is one of two sites in the ACT, the other being Tidbinbilla Nature Reserve, where Eastern Bettongs from Tasmania were first released in an attempt to reintroduce them to the mainland. Ecologist Millie Sutherland-Saines says there are two ways to release animals into a new area – a soft release and a hard release. “With a soft release you put them in an enclosure within the site, provide them with bedding and food and over time open up so they can go out and explore if they want but can come back if they need to. With a hard release, you just chuck them out there and see how they go!”

The project was a collaboration between the  Australian National University, ACT Government and not-for-profit: Woodlands and Wetlands Trust. “We wanted to see what worked best for the Eastern Bettong and we found that neither really mattered to them,” says Millie. “So we thought in the future we would just put them straight out there. It seems harsh but they were totally fine. If anything, the animals at Tidbinbilla, where we did a soft release, became a bit lazy. They weren’t making as many nests as the wild ones and weren’t foraging for food because they didn’t need to.”

Bettongs are ecosystem engineers because of their incredible digging skills. Their average size is between 1 and 2 kilograms, they stand about 30cm and hop like a kangaroo. “They dig because they want to find truffles, their main food,” says Millie. “We didn’t know if we had the right truffles in the sanctuary for them but thankfully we do. Researchers have worked out one bettong can dig about 5 to 8 kilograms on one night, so multiply that by 100 bettongs it means they are doing a lot of repairing of the soil health.”

In their lust for tasty truffles bettongs create little holes which turns the soil over, plus native seeds and spores fall into the holes and germinate more easily than on flat solid ground.

Another reason which hasn’t helped their decline is their unusual maternal habit. When chased by a predator they react by throwing the baby out of the pouch so they can get away. Although there are few, if any predators, at Mulligans Flat, which is secured by multiple fences and electric wires, those careless mothers mean there is a hand-raised bettong project whose progeny have become the stars of education programs.

The bettong experiment is not the only success story at Mulligans Flat. Other native species including the Bush Stone-curlew, Short-beaked Echidna and Agile Antechinus are thriving. The Eastern Quoll, which became extinct on mainland Australia in 1963 due to feral predators but still survives in Tasmania, also calls the sanctuary home. Bettongs and quolls are classified as “critical weight range” animals, lying between 500 grams and 5kg which makes particularly susceptible to fox and cat predation. The sanctuary runs evening tours during which guides with spotlights reveal the bettongs on their truffle digging outings. “You are highly unlucky if you don’t see a bettong on one of our Twilight Tours,” says Millie. “They are usually solitary in their own ranges and the guides know where they are.”

The bettong project in Mulligans Flat has been so successful that it now supplies animals to other reserves around Australia. Not only is the sanctuary fortressed against feral predators, the adjacent newly established suburbs are all designated cat containment areas, ensuring the safety of the native wildlife.

“It was the first mammal to be introduced to Mulligans Flat and because they have done so well they have become our symbol in saying no to extinction.” says Millie. “Having this animal here that went extinct 120 years ago and is thriving in the sanctuary is truly wonderful.” TTW

Diana Streak lives across the border from Mulligans Flat Woodland Sanctuary in the NSW village of Sutton. Find out more about the Woodslands and Wetlands Trust or book a Twilight Tour or Family Night Walk. Download a map for self-guided walks. Featured image: Adam McGrath

A funny thing happened with the dirty laundry in Manaus