The tiny South Pacific island where bungee jumping was invented 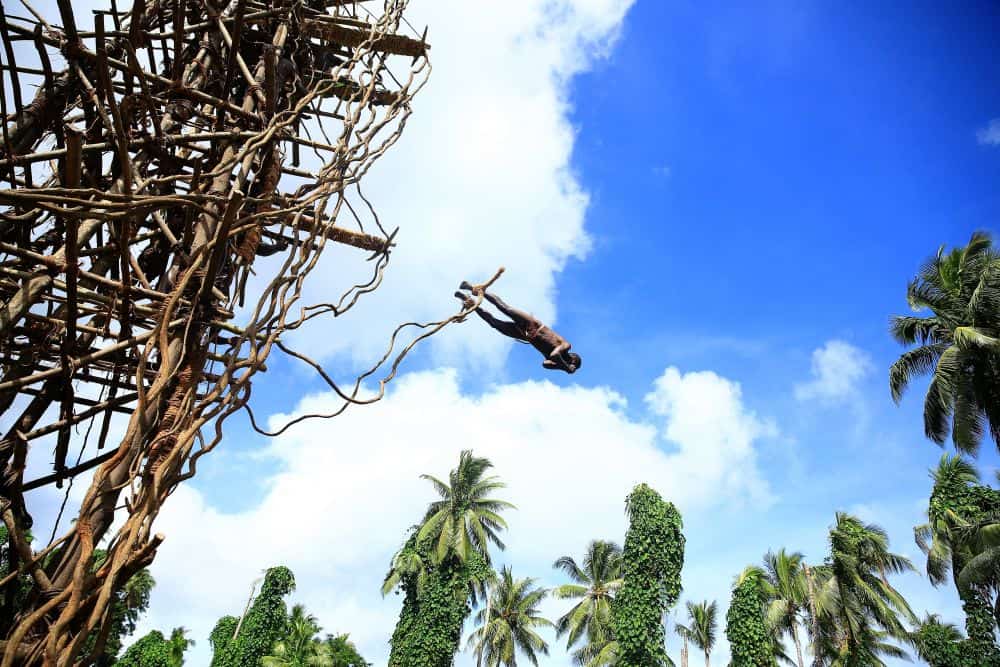 Bungee jumpers have the brave men of Pentecost Island in Vanuatu to thank for popularising this death-defying activity.

But the man raises his arms to the wide blue sky, brings his hands to his chest as though in prayer, emits a long and mournful bellow, and dives off the 30 metre high tower into thin air.

My heart stops. My breath is ripped from me. I clap my hands over my eyes and peer from behind quaking fingers at the figure now plummeting to earth. His body is a like a sword aimed directly at the soil beneath him; it will plunge, surely, to its very core. 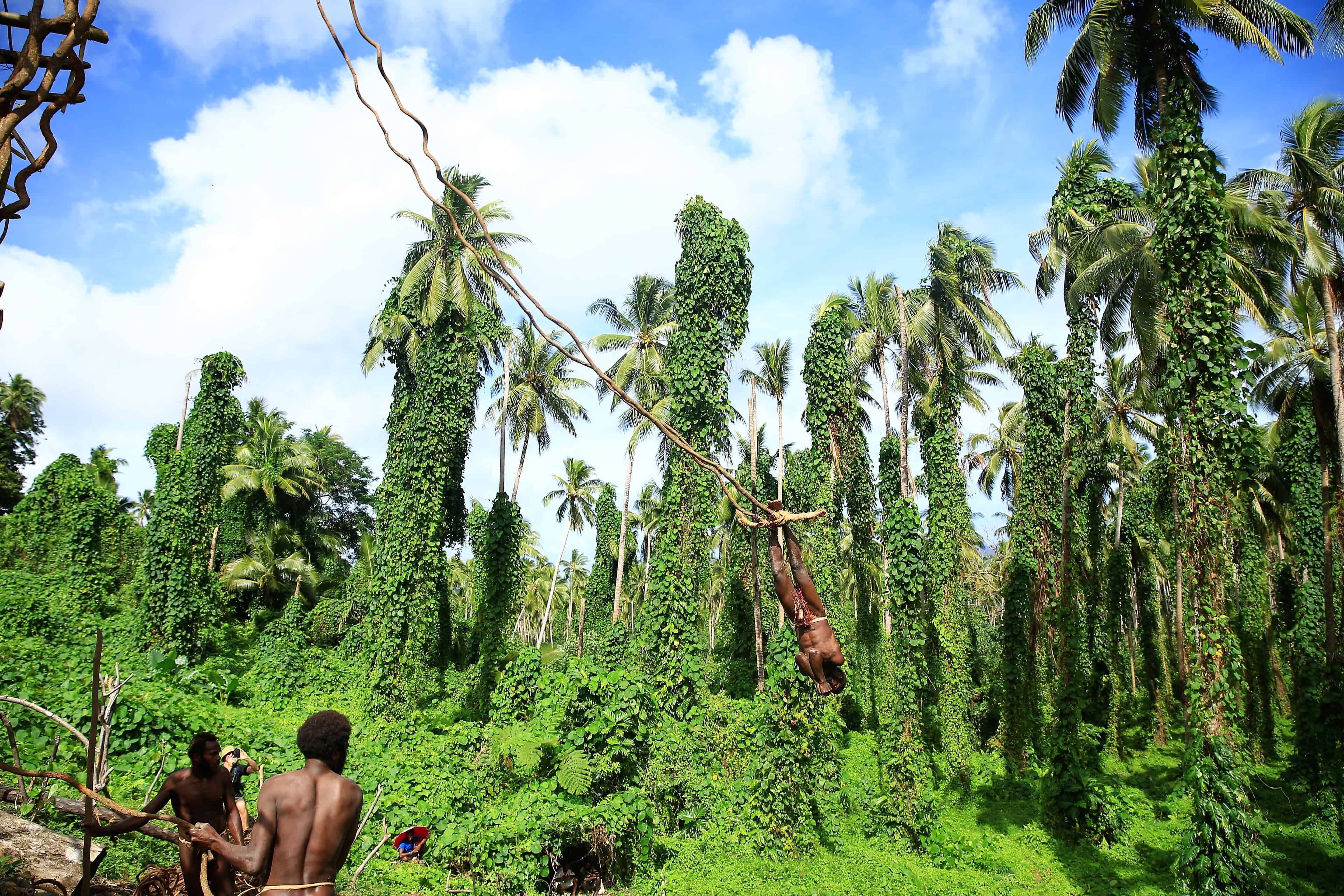 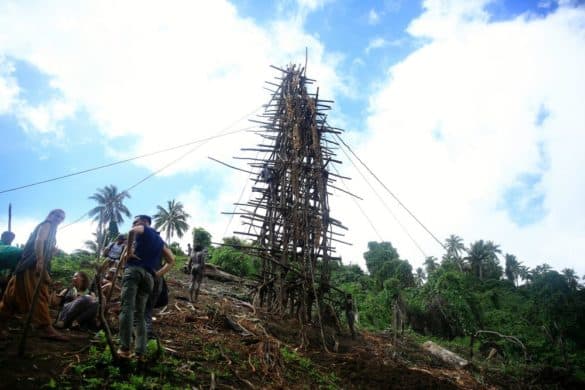 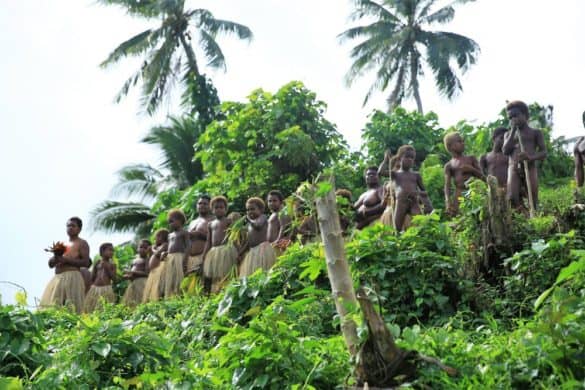 But just as his head brushes the earth, he is wrenched by some miracle upwards again, swivelling in reverse to the empty space from which he has come. He falls again, less violently this time, and is left swinging from the tower, sweeping the earth’s surface with his mop of hair. The vines tied tight around his ankles have saved him from disaster.

I’m on the Pentecost Island, around 200km from Vanuatu’s main island of Efate and the annual naghol ceremony is underway. Every year from April to June men and boys from this island build wooden towers and, in acts of extreme bravery, jump from them with nothing but forest vines to break their fall. It’s here that the idea for bungee jumping was first conceived. The people of Pentecost Island are now fighting for recognition of this fact, and have suggested that some of the proceeds earned by bungee jumping operators to be funnelled back to the people who inspired the sport. 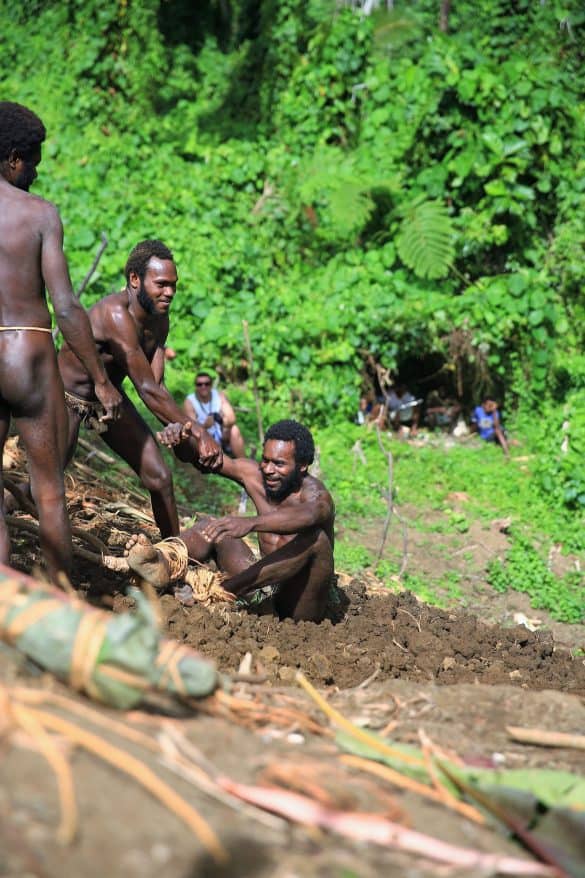 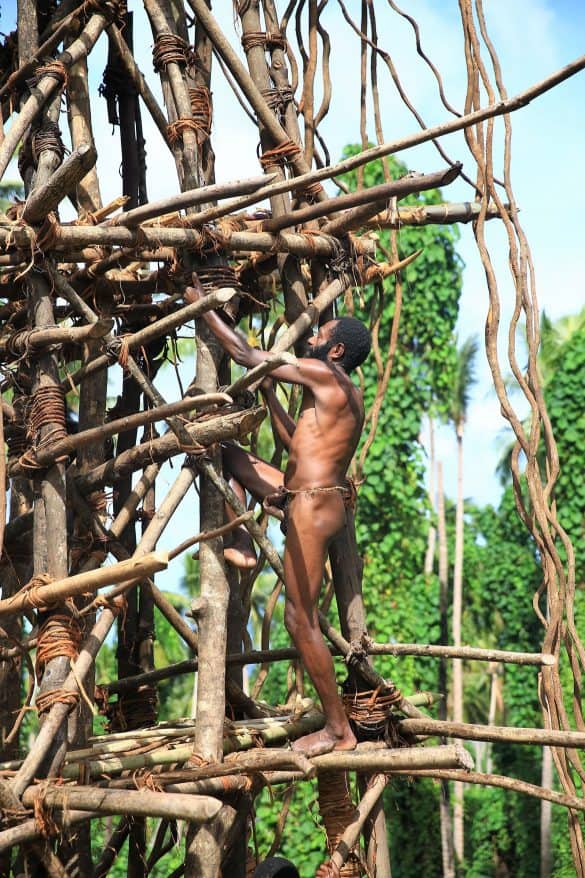 Plentiful yams and a wily wife

The ritual is a petition to the gods for a rich yam harvest. But it also commemorates an enduring legend: a woman from the island was said to have jumped from a banyan tree after arguing with her husband. Furious, he had followed her up the tree and into the void. But, unlike his wily wife, he’d forgotten to tie vines around his ankles to break his fall, and so he plunged to his death. Today, the naghol festival serves as a reminder to the women of Pentecost Island that their menfolk will never again be tricked into jumping from a towering platform without a safety harness.

But the vines themselves seem flimsy nonetheless. I can barely watch the young boys lining up to jump from platforms closer to the ground, or the older men jumping from platforms that increase in elevation along with their age and bravery. My heart is threatening to give in by the time the day’s final hero teeters on the very tip of the tower, holding out his arms to the gods and getting ready to fly.

But all goes well. The crowd applauds and sighs with relief as he’s disentangled from the vines and set upright. A smile spreads across his face, for he’s appeased the gods. Until next year, at least. TTW

Catherine Marshall is an itchy-footed journalist who lives in Sydney and, pre-pandemic, spent much of her time roaming the world. Her next favourite place after Africa (where she was born and grew up) is the one she’s not yet been to. She’ll write as soon as she's allowed to travel there.

The Gondwanan tree hiding out in Tasmania’s mountains

The tellers are different at Australia’s oddest bank

A little star twinkles brightly in the Orange...